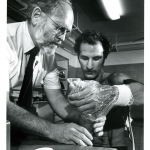 Dr. James Robert Cade, a nephrologist who studied physiology of exercise,  came to the University of Florida College of Medicine in 1961 as an assistant professor in the renal division.  In 1965, Dr. Cade and a team of researchers who included Dr. H. James Free, Dr. Dana Shires, and Dr. Alex de Quesada,  began work to answer the question posed about the football team- “Why didn’t football players urinate after a game?”  At this time, basic exercise wisdom discouraged replenishing liquids lost to sweating during a game, and the team quickly learned that players lost so much fluid that they had none left to form urine.  They developed a drink that contained salts and sugars that could be absorbed more quickly and the basis for Gatorade was formed.

Dr. Cade was an innovator who also worked on inventions such as drinks, and popsicles that could help replenish protein, pneumatic helmets, and a number of other projects.  He was a talented clinician and teacher, as well as a devoted violinist who would play for his patients and whose numerous interests show a basic creativity and ability to make unexpected connections to answer research questions in new ways.